Telltale’s most recent contribution to gaming is the follow up to their sensational The Walking Dead series. This time last year, Telltale Games delivered the first season adding a new and unique gameplay style to the gaming industry. The first season was available on multiple gaming platforms including mobile, pc and home consoles.

Needless to say, The Walking Dead fans were left in shock after the dramatic ending of the first season, making the second, one of the most highly anticipated games of 2013.

Season two sees the player in control of the highly relatable character, Clementine. The first episode shows an insight into the struggles Clementine must face in order to survive in a post-apocalyptic world, but this time without the help of her guardian. Clementine defies the stereotypical young girl through her strength and newfound courage, making the new protagonist enjoyable to play. Clementine was previously associated with phrases such as; innocent, helpless, young, and vulnerable. The new protagonist allows the player to witness the game in a new and original light, offering the new season a fresh outlook. Instead of being the guardian, the player witnesses Clementine’s struggles to follow Lee’s teachings.
Gameplay:
The continued storyline begins with a prologue informing the players with a short time lapse of previous events tailored to personal choices that the player made from the first season. It becomes apparent that the central focus of the storyline is Clementine; other characters are left in the dark when it comes to back-stories. First impressions make it obvious that more questions will be asked rather than answered, which could be seen as a positive or a negative. The first episode seems to represent the beginning of a story rather than a story in itself. It sets up important groundwork including locations, characters and choices, which will no doubt become important in the following episodes.
Having played from an iPad, the game controls are pretty much the same as those of the first season. The only noticeable difference was the added interactive button, which requires the player to touch the screen in a certain pattern in order to perform a task; the control was never explained so after a trial and error phase I was able to work it out myself. Other than that, the game has you wandering environments to interact with objects and progress further through the story. A few glitches were present throughout the game and some of the animations proved to be stuttered, especially while manoeuvring Clementine in interactive portions of the game.
The choices prevalent in the game are a definite positive; the idea of having your own story tailored to an individual’s choices is very exciting.  The player can decide the attitude of Clementine; will Clementine stay innocent and vulnerable, or will she take on a new edgy and aggressive outlook in a world rife with the un-dead and relentless humans? Many choices will be made, from whom she will save to those she can trust.
It is safe to say that Telltale Games has succeeded in creating a great follow up series of the beloved Walking Dead episodic game. The new episode can easily be replayed due to different decisions offering different outcomes (I have already replayed it 3 times). Many of the choices haven’t revealed the outcome yet and are expected to become prevalent in following episodes, which are yet to be released.
Graphics and Sound:
The visuals of the new series are similar to its predecessor; sketchy, like a comic book. All that remains’ graphics are very artistic, the landscape views are beautiful and offer the game a unique trait. The graphics seem to be of higher quality when compared to the previous series, showing major improvements and development of The Walking Dead series. The only obvious negative of the graphics are the minor glitches and at times unnatural looking movements. 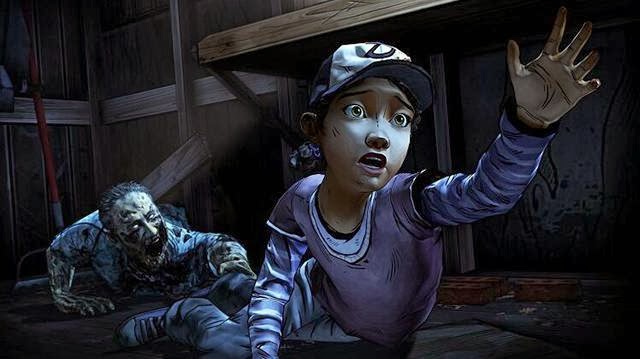 During my gameplay experience I noticed a large glitch, which was quite creepy. The glitch happened in a scene in which Clementine searches through the house to find supplies to heal her arm after being locked in a shed. A male figure would be found standing in the middle of multiple rooms, the figure couldn’t be interacted with and you could pass through. I don’t know if it’s a coincidence but the figure had a striking resemblance to the long lost Lee…. Freaky!
The voice actors are extremely believable and suit each individual character, the sound seems to harmonize successfully, combining environmental noises, character voices, music and movements effectively to create an amazing experience especially when teamed up with a set of great headphones. Telltale use music and sound effectively to set the ideal mood, it plays a major part in creating tension at intense points of the game.
Pros
Cons
Overall, All that remains proves to be great groundwork for following episodes. The first episode doesn’t offer much of a detailed storyline, however it does show insight and tease as to the likely direction of the plot in the coming episodes of the season. With only a few negatives mainly focussed on minor glitches, All That Remains lives up to its highly anticipated status and is definitely worthy of purchasing and playing.
Score:
Gameplay: 4/5
Storyline: 5/5
Graphics and sound: 5/5
Overall: 4.5/5
Game developer: Telltale Games
Price: £2.99
Released: 18th December 2013
Platforms: iPhone, iPad, PC, Mac, Xbox 360, PlayStation Vita, PS3